Bev – You can find an affordable dentist who offers financing or payment plans so the dental treatment will work with our budget.

What Will an Affordable Dentist Do for a Gummy Smile?

Excessive gum tissue can dominate teeth and make them look smaller than they actually are.

A gingivectomy (commonly referred to as a gum lift) is a surgical procedure used by dentists to remove gum tissue around your teeth.

What Should You Expect?

Gum tissue can be removed and shaped for more than cosmetic reasons. Excessive gum tissue around the teeth can make it more difficult to keep teeth and gums free from plaque-producing food debris. Inadequate cleaning can lead to gum disease. So it’s a good idea to get an examination and learn about your treatment options.

Schedule consultations with at least two experienced cosmetic dentists, and compare your options. Don’t pick a dentist just because he or she is the most affordable. Take time to do some research to learn about the dentist’s training and experience—particularly with gum contouring. Ask the dentist how many cases like your he or she has completed.

Hi, I am getting 4 new crowns in April. I received some free teeth whitening. I want to get my as white as I can before I get the crowns. Will you please tell me how many weeks I should do the touch up and how long I should keep the gel on each time? Keva

Keva – It concerns us that you didn’t receive details from your dentist on how to effectively whiten your teeth before you receive your crowns. This is something a dentist usually discusses with patients in detail as part of your treatment plan.

Before You Use Free Teeth Whitening

Our first concern is the source of your free teeth-whitening gel. If it wasn’t received from a dentist or a reputable company, your teeth may not get white, or the gel could actually damage your teeth.

Assuming that you’ve receive professional bleaching gel, there are several factors to consider. 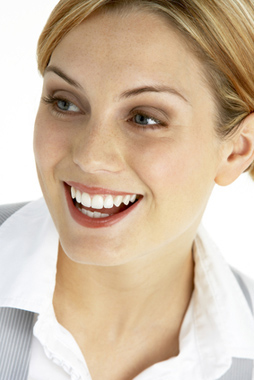 I need to have my wisdom teeth pulled and I plan to see a sedation dentist for it. I already have a dentist and I think she’s awesome, but she won’t sedate me for the procedure. Actually, she doesn’t even provide any kind of gas or anything. I even asked her if she’d just prescribe something for me to help take the edge off during the procedure and she won’t even do that much. I’m really disappointed because I already know and trust her, but it’s her practice, and her rules, I guess. So, instead of pulling my wisdom teeth, she gave me referrals to a couple different sedation dentists. Actually, I think these guys are oral surgeons who just happen to provide sedation services as well. Anyway, I feel kind of bad saying this, but I’m not comfortable with male doctors. I’m not saying they’re bad or dangerous or anything like that. I’d just feel better if my doctor was a woman, especially if I’m going to be sedated. Again, I don’t think a male doctor would do anything bad, I just feel more comfortable with a female physician, especially for something like this.

Here’s where the problem comes in- she referred me to a couple different oral surgeons and told me I could choose one, but they’re all men. I called my insurance company to see where I could go, and then I asked them if they could tell me which ones were women. Instead of helping me, the insurance agent gave me a hard time about it saying, “Their credentials are the same. What does it matter?” Well, it matters to me. A lot. I don’t think I should be made to feel bad just because I want to see a female doctor. I’ve called around to most of the offices on my list and it looks like they’re all men. Seriously. Are there no female oral surgeons?!?

What are my options here? Is it ok that I’m insisting on seeing a woman, or am I being unreasonable? Thanks, Anonymous

You’re not being unreasonable at all. Some people simply feel more comfortable with a female practitioner, and that’s okay. When you’re choosing a dentist, you need to feel comfortable and know that you can trust him or her. In fact, many insurance companies that post lists of their physicians online actually allow you to search by gender for this very reason.

At the same time, you’re experiencing one of the odd quirks of dentistry. The latest stats indicate 98% of oral surgeons are men. This has been the topic of scientific research; trying to uncover why so few women get into the field and what can be done to attract more women to it. Sadly, very little has changed over the years, and it continues to be a male-dominated profession.

There’s a very real chance that there are no female oral surgeons in your area, particularly if you live in a smaller community. So, you have a couple of options.

1) Visit the office of a male oral surgeon and see if he has female staff members who will be with you during treatment. Offices usually have an assistant assigned to each patient, and the majority of assistants are female. You can also ask if the anesthesiologist, if one will be present, is female. So even if you can’t have a female doctor, you may feel some comfort by having women around you while you’re medicated.

2) Search for a female sedation dentist. It sounds like your dentist was willing to do your extractions, which means a specialist isn’t really needed for the extractions. You may be able to find a female general dentist in your area who provides oral conscious sedation.

Answers to your dentistry questions